Bees are an insect of the order Hymenoptera, alongside their cousins the ants and the waps. Most types of bees in Australia are solitary. Our typical honey bee is the stingless bees. Even so, the introduced European honey bee is far more popular for commercial honey production.

Like wasps, bees are armed with stingers that deliver venom in one fell swoop. However, unlike wasps, bees can usually sting only once. Their stingers usually remain inside the affected animal or human. This leads to the bees' death, but not without them having the last laugh. Once the stinger remains inside, it continues to release venom and other chemicals that signal nearby bees of the threat. If a person is allergic, this could have serious complications and even a lethal outcome. 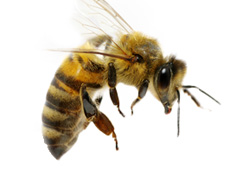 A slender wasp-like body covered in striped colouring. Females have a distinctive barbed stinger. A honeybee is more likely to sting you than any other bee. These bees sting when they see you as a threat to their honey and nest. This could be at any time you stand between them and their nest, cast a shadow on it or cause the ground around it to vibrate.

Other social bee species build colonies on specific locations. For example, Carpenter bees burrow in dead wood where they build their nests. Also, there are parasitic bees which mimic the appearance and scent of other bee species.

On their upper body sweat bees have very characteristic metallic colouring. They are attracted to human sweat and might be observed attempting to lick the sweat off a person’s body. Sweat bees are not aggressive unless provoked, but possess a powerful sting. Their venom is released continuously, which is why the stinger needs to be removed asap.

Orange patch on upper body and dark colouring along the body. Often possess a white tip at the ‘tail’. Tree bees are known to be more aggressive than other bumblebees and could sting people around their nest. However, their sting is considered to be less painful than that of a honey bee or sweat bee.

How to detect a feral bee infestation

Bee infestations are not hard to detect, it's the removal that's challenging. Much like wasps, feral honey bees will likely build their hives in trees, under eaves, or in sheds. If there's an irregular number of bees flying around trees or your shed, that's probably where it will be located.

How to detect a carpenter bee infestation

Many people believe that carpenter bees eat wood, but that is incorrect. They simply carve it. And they do it very efficiently. Having a carpenter bee infestation is more difficult to spot because they create their nests in wood. They can do structural damage very, very quickly so seek immediate professional help if you think this might be the case. Finding small holes in the wood and detritus outside is a pretty clear indication.

What to do in case of a bee infestation

The most important thing is to stay calm. Do not attempt to remove the hive on your own. Bees will die to protect it and you will get stung. Stay away and call in a professional because it's important to know what species is infesting you. Why does that matter?

The European honey bees in Australia are an invasive species. While they're under control by apiarists and honey producers, it's fine. However, in some instances, a new hive is formed and it goes feral, meaning it's under no one's control. Those hives can grow quite a bit due to the social nature of the bees. As they're not native to Australia, they don't have any natural predators here, either. This makes them compete with the native bee species. And unlike most native species, they don't leave much behind. This can cause a great problem for our native bees.

You might have heard about the dwindling bee populations. Well, we're not talking about invasive species. So it's important to know what you are dealing with before further measures are considered.

Do all bees have stingers?

No, they don't. In the order Hymenoptera, only female bees have stingers. Male bees (called drones) do not sting as they lack stingers altogether. Their only function in life is to procreate, which is why they have relatively short lifespans.

There are also species, such as the Austroplebeia stingless bees (native to Australia) that simply do not have stingers. Some other species, like the cuckoo bees, have reduced stingers, which limits their ability to sting.

What should you do in case of a bee sting?

On one hand, native bees are essential to the ecosystem. They evolved alongside native plants and have become the engine of their pollination.

Most native bee species in Australia are solitary, which means every female is fertile and they build their own nests. Hence, even if they live in close proximity to one another, most of them wouldn't be able to cause an infestation and be labelled as pests.

The social stingless bees are harmless and live in harmony with their environment. So they may not be considered dangerous, either. However, this is a pest control site, so there must be bees that are pests, right? An excellent observation!

Indeed, the introduced European honey bees are responsible for most bee infestations. It's usually colonies gone feral. Because of their quick reproduction, they often out-compete the native bees for resources and disturb the natural order of things. They also aggressively defend their nests, so it's necessary to remove them carefully. Do not attempt this on your own because there is a serious risk. It is always safer to opt for professional bee removal, instead.

Are you noticing signs of a bee infestation?

Book an inspection
This site uses cookies. By continuing to browse the site, you are agreeing to our use of cookies. Find out more.