Ants have one of the greatest evolutionary success stories in history - they represent more than 10% of the entire biomass on land! They have been around for more than 100 million years and they have outlived reptiles and mammals, alike.

Having gone through very subtle changes over such a long period of time and always working together for their common good, ants are a really impressive biological achievement.

Their numbers, resilience, and industriousness are what makes them such a formidable pest, too. Our very own species of Australian ants can be even more impressive. So let's delve in a bit deeper and see what makes these hardworking arthropods tick!

Australian Bulldog Ants (Myrmecia Gulosa), also called Bull ants are large, aggressive ants that can grow to 40mm. They're black with some red tones on their abdomen. They have strong and large mandibles with which they kill other insects and small animals.

Black house ant (Ochetellus glaber) is black in colour, glossy ants, that can reach 5mm. A colony of black ants can consists up to 7000 ants. The older the colony, the bigger the ants are. Black ants can bite.

Pharaoh ant (Monomorium pharaonis) is a yellow, almost transparent ant. It can reach up to 2mm. Their colonies consist of many queens, which allows them to fragment into smaller colonies quickly when attacked. These ants can carry various diseases. 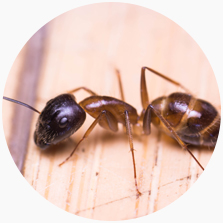 Banded sugar ant (Camponotus consobrinus) is a species native to Australia. They have a black head, orange-brown thorax and can grow to 15mm. These ants can be mainly found in forests and woodlands. They prey and kill other insects.

The fire ant is also called red ant and it's a collective name for the genus Solenopsis. They have brown heads and darker bodies and can grow to 6mm. They sting and they're venom is really strong, in some cases, you may need medical attention. 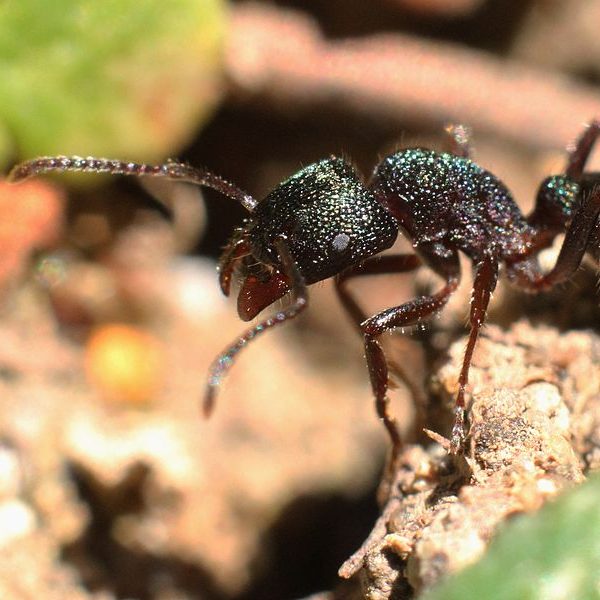 Green-head ants (Rhytidoponera metallica) are a species of ant native to Australia. They have a distinct metalic look and get up to 5-7mm in size. All the females are fertile, which makes their colonies more resilient. 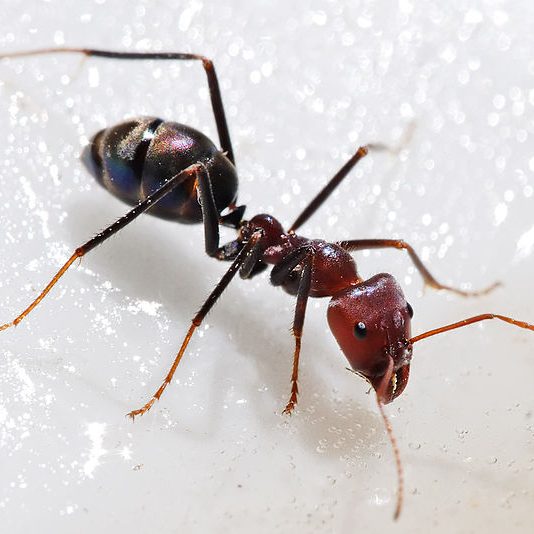 Meat ant (Iridomyrmex purpureus) is a dominant native Australian ant species. They are mostly distributed along the Eastern coast and the inland wilderness.

Meat ants are characterized by their red head, dark body, and mean attitude. At 6-12mm, they are mid-sized ants, but their sheer numbers make them impressive.

Carpenter ants (Componotus spp) are dark brown or black, spanning anywhere from 3 to 12 mm. It's a popular misconception that they have a hueg appetite for wood, but that is incorrect. They create their colonies inside of wood, but throw the debris outside rather than eat it.

Jack jumper ant (Myrmecia pilosula) is a venomous native Australian ant. Despite their relatively large size at 12-14mm, they have the ability to jump long distances.

Australian ants live in colonies based on a caste system, no different from ants all over the world. Generally speaking, there's one or several fertile females (the queens), males (the drones), and the rest are sterile females (workers and soldiers). Queens live a lot longer than workers (might have to do with the fact that they sleep more), but drones have the shortest lifespan because their only purpose is a reproduction. There are also gamergate colonies where all females are fertile and the queen caste is all but nonexistent.

Ants feed predominantly on sugary and fatty foods. They mostly go for liquids since they incapable of consuming solid foods. If they need to process solid foods, they feed it to their larvae and the larvae produce a protein-rich edible goo adults can later consume.

What attracts ants to the house?

If you have ants inside, they're looking for one of two things - food or water (possibly both). Let's round up the usual suspects:

Read more about what attracts ants to your house

What do ants eat?

Ants have a diverse diet. Just like humans, they need protein, fat and carbohydrates to sustain a healthy diet.

Ants are usually omnivorous, but each species have preferred food. Some ants prefer to hunt insects and small animals, some eat leaves and greens and some prefer sugary food.

Worker ants scout for food outside the colony. Once they identify a save food source, they return to the nest leaving a chemical trait behind them, so the other ants could follow the trace and bring the food to the nest.

Read more about what do different ant species eat.

As much as 3% of people can be allergic to ants in some areas that are overrun with these venomous buggers. If they get stung, they will go into anaphylaxis. Their sting can be quite painful even if you're not allergic. To make matters worse, once you get stung, the ant usually leaves a chemical trail warning its brethren you're a threat, so you might get a lot more if there's lots of ants around.

There is strength in numbers! No one proves that better than ants. They affect the environment around them in very profound ways, despite their small size.

When they create their nests and go about their daily business underground, they inadvertently affect the nutrient content of the soil. They can also help to remove detritus and manage natural waste.

Another distinct characteristic is their predatorial behaviour toward some species. Because of this, they are also a natural form of pest control and control the populations of certain species that might be dangerous for your garden. In high enough numbers, they have no problem hunting down larger prey.

As temperature rises ants become more active and will scout your entire property for access to food and water. If they decide that your home has the perfect conditions for nesting, you might deal with an ant infestation.

Read here how to ant-proof your home and assure to keep the little invaders outside.

Get rid of ants inside

If ants invade your home, they nest usually in your kitchen or your bathroom. Follow the scouts and try to identify if their colony is inside and if there is a food residue that attracts them. If that is the case, make sure to clean up all of it.

You can cut down their chemical trail to the food, cleaning the area with wood and vinegar. The vinegar scent will erase the chemical and the ants won't be able to find the food source again.

Read here how to make an ant trap and how to get rid of ants inside.

Get rid of ants outside

Ants can invade your backyard or garden as well. Removing an ant infestation from your yard can be difficult. The best way to do so is to destroy their colony within the nest.

There are some natural methods to get rid of ants outside such as pouring boiling water into the nest, making a soap and water mixture, making a repellent spray or even pouring glue into the nest.

It's best if you treat the nest early in the morning or late at night when most of the workers are back in the nest.

Read here detailed description of how to get rid of ant nest outside naturally or using pesticides.

Get rid of ants in your car

An ant infestation can happen even in your car. It usually means that the ants have found a source of food or water, or their colony is nearby the place you parked your car.

The ants you see inside your car may be scouts. In that case, they might leave soon on their own once they realize there is no food around.

If that's not the case learn how to get rid of ants in your car.

What can you do if you have an ant infestation

1. Keep all food sealed away in plastic containers.

2. Look for the source of the infestation - if it's food or a leaky faucet, deal with this problem first.

3. Thoroughly clean the floors - this will eliminate their chemical pathways.

4. If the problem persists, you can always count on professional ant control.

Book an inspection
This site uses cookies. By continuing to browse the site, you are agreeing to our use of cookies. Find out more.
}